Shakespeare talked about the ages of man, and it’s well known that age seems to revert us to our youth. The last handful of years that’s been true for me with regard to mystery authors. For the first time in many decades I’m reading (or rather re-reading) Dorothy L. Sayers (Lord Peter Wimsey), Rex Stout (Nero Wolfe), and others from my past.

This month I’ve been enjoying Agatha Christie and her Hercule Poirot novels. I got into them after finishing a collection of 51 short stories starring her famous Belgian detective (with his “egg-shaped head” and giant mustaches). Reading those put me in the mood to revisit the novels.

And I must say I’ve been thoroughly enjoying them!

Dame Agatha Mary Clarissa Christie (Lady Mallowan), DBE (1890–1976) is unquestionably the queen of mystery fiction. My Shakespeare reference was apt because, with over two-billion books published, in over 100 languages, only The Bard and The Bible have outsold her. That makes her arguably the queen of literary fiction — the most popular novelist ever.

She wrote 66 detective novels and 14 short story collections. Her work being available in over 100 languages makes her the most translated author of all time.

She also wrote 30 stage plays. The most famous, The Mousetrap, is the longest running play in history. It debuted in London’s West End in 1952 and ran continuously for 68 years until COVID-19 forced it to close this past March. (It took a worldwide pandemic to stop the queen!)

Christie published her first detective novel, The Mysterious Affair at Styles, in 1920 when she was 30. It introduced her famous detective, Hercule Poirot — her version of Sherlock Holmes. (The rest, as they say, is history.) 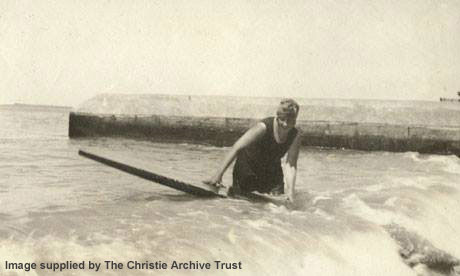 This month I’ve been chain-reading Poirot novels (in no particular order — publish date and chronological order are different; other than the occasional reference, there is no connection between stories). So far I’ve read 19 of 34. (They’re short reads compared to today’s books; one can easily read them in an afternoon.)

As I wrote last month, reading that collection of short stories led to grabbing two of the novels I found freely available to Amazon Prime members (alas, they want you to buy all the others).

They were the first two Poirot novels Christie published, The Mysterious Affair At Styles (1920) and The Murder on the Links (1923). (As just mentioned, the former is her debut novel.)

I enjoyed them a lot, so I checked my library, and, wow, bonanza! Nearly all the Poirot canon is freely available in ebook form.

(I’m so loving library ebooks. That, too, is something of a return to youth in that most of my early reading came from the local library. I was a weekly visitor.)

The Queen of Fiction!

As an adult (with much more reading under my mental belt), Christie’s writing impresses me far more than it did as a callow youth. At the time I had no appreciation of her skill — turns out she is really good. Her popularity is well-deserved.

Arthur Conan Doyle’s Sherlock Holmes stories are historically special — even unique — but the authors who’ve carried on the tradition have generally been superior writers. Christie absolutely was.

The truth is, Holmes is fun, but he’s ultimately preposterous. Mystery stories are like hard SF in that readers often forgive lack of character development and arcs as they aren’t the focal point of the story. That said, superior mysteries and hard SF nails both.

Agatha Christie fills her stories with rich very human characters — part of the fun of a Christie novel is the cast of characters. They are always interesting with plenty of background drama for red herrings. (Christie is excellent at misdirecting your attention.)

I also enjoy how well she uses the Rashomon effect. Different characters paint different views of events and people. It brings to life how our opinions color our views. Christie was a cogent observer of the human condition (her stories have genuine depth to them).

If there is fault, it’s that the dialog can feel a bit dated, which is minor, and there are moments of casual racism (not so minor). That’s not uncommon in writing of that age, but it’s jarring. Like finding mold on your bread or a worm in your apple. We’re not free of our problematic past.

For instance, two of her more famous novels, Murder on the Orient Express (1934) and Death on the Nile (1937), take place, respectively, on a train and in Egypt, mostly, as the title says, along or on the Nile river. (A lesser known story, Death in the Clouds (1935), takes place on an airplane.)

In some books, Poirot doesn’t show up until later in the novel. I think of it as Columbo mode, because that was standard on that show. (Aspects of Det. Columbo’s approach do seem to channel Poirot, and I can’t help but wonder about influence.)

I find the classic sleuth refreshing compared to the modern sleuth. Calmer, anyway. Both involve an arc of discovery, but the denouement differs. Classic sleuths expose the murder in the genial context of the drawing room or study. The murderer, knowing they’re beaten, often just confesses and surrenders. Modern murders — when they realize the sleuth is on to them — attempt to kill the sleuth in a thrilling death-defying final scene.

The Nero Wolfe stories follow this classic arc. Everyone involved gathers in Wolfe’s study for the big reveal. Columbo likewise just talks to people; it was all very congenial (another reason I suspect a Christie influence).

On the other hand, more modern detectives, such as Sue Grafton’s Kinsey Millhone, and Tony Hillerman’s Jim Chee and Joe Leaphorn, and usually Sara Paretsky’s V.I. Warshawski, generally, and rather predictably, must escape certain death in the final scene.

A version of Hercule Poirot

Poirot’s and Christie’s debut, The Mysterious Affair At Styles, is a classic British murder mystery involving a poisoning, (but with something of an interesting twist in how it’s administered).

In the second book, The Murder on the Links, Poirot and his companion, Captain Hastings, are on vacation in France when they encounter a murder.

More to the point, as with Sherlock Holmes, Hastings is the narrator (and info dump excuse). But at the end of the second book Hastings marries and moves to Argentina. (He returns in later stories, but many of the stories don’t include him.)

The marriage of Hastings is an aspect of something I’ve noticed in many of the Poirot novels. Christie is a romantic. Many of the stories feature two people who either finally find each other (maybe with a little nudge from Poirot) or have obstacles removed (by Poirot — usually one of them has been falsely accused of the murder).

Poirot states several times that, despite being a confirmed bachelor, he has a romantic heart, and indeed he does. (He also clearly has OCD when it comes to symmetry and neatness.)

The third novel, The Murder of Roger Ackroyd (1926), is a written account by one Dr. James Sheppard, who is a friend of Roger Ackroyd (who, as the title says, is murdered). Dr. Sheppard helps Poirot investigate the murder of his friend.

The story has been redone in TV, film, radio, and stage. It has won awards and acclaim, and it’s considered hugely influential in the genre. It’s one of Christie’s best known novels.

Spoiler: Dr. Sheppard is the murder! (I think reading the story knowing it’s the narrator makes it richer, so I’m comfortable spilling these beans. Besides, the book was written almost 100 years ago.)

In fact, Christie mixes it up quite a bit when it comes to Poirot’s “Watson” (and in some cases Poirot is solo).

One of the more interesting companions is Ariadne Oliver, who clearly is Christie’s avatar. Oliver is a well-known, popular, and quixotic, mystery author known for her love of apples. Many of her most popular books feature her vegetarian Finnish detective Sven Hjerson, about whom she has conflicting feelings.

Which parallels Christie’s feelings about Poirot. (For that matter, Doyle didn’t like Holmes, either.) I think the books with Ariadne Oliver are especially fun. Christie, through Oliver, offers her opinions on being a popular mystery writer with lots of fans.

I’d always assumed my interest in Christie centered exclusively on Poirot. I never connected with Miss Marple or others. Yet two of the more striking Poirot books don’t have much Poirot.

For one, I really liked The Hollow (1946). Lady Lucy Angkatell may be one of my favorite supporting characters. (Poirot was struck by her, too.) Ironically, Christie regretted bringing Poirot into this story, and, indeed, he seems almost peripheral somehow. Christie later turned the novel into a play and dropped Poirot from the plot, which says something. I found the drama in this one especially compelling.

The other is Three Act Tragedy (1935). Part of what’s interesting in this one is the structure, which, on multiple levels, resembles a play. It’s a clever bit of writing. Poirot is on hand early, but doesn’t get involved until about halfway through. Much of the detecting is done by other characters. The sheer cleverness made me laugh out loud several times.

In these fraught times, Agatha Christie is a pretty nice way to escape for an afternoon.

My recent attraction authors from the last two centuries may have more to do with the age than my age. (Or both.) We live in crazy times.

Science fiction isn’t for everyone, but I think anyone can find something in Christie to enjoy. I certainly have.

Stay mysterious, my friends! Go forth and spread light and beauty.

The canonical fool on the hill watching the sunset and the rotation of the planet and thinking what he imagines are large thoughts. END_OF_DOCUMENT_TOKEN_TO_BE_REPLACED
This entry was posted on Monday, September 28th, 2020 at 7:27 am and tagged with Agatha Christie, Hercule Poirot, murder mysteries, mystery books and posted in Books, Mystery Monday, Writing. You can follow any responses to this entry through the RSS 2.0 feed.
« Sci-Fi September
More Multiplying »