Let’s start with the basis states of a qubit:

Any measurement results in one of those. They let us define the four superpositions: 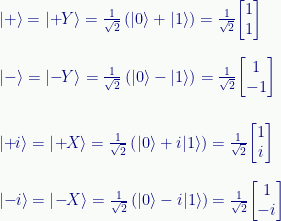 Which together all form the three axes of the Bloch sphere:

Spin (in most cases) is a qubit — it has only two measured values that form its basis. All other spin states are superpositions, as shown above. In the context of qubit spin, the Pauli spin matrices are important:

These act as operators on the spin state.

It’s the average of a putative set of measurements made on identically prepared systems. We analyze spin on the three axes described above, a basis axis and two orthogonal axes defined by superpositions.

We’ll start with the Z-axis, which is the basis axis:

Which give us expectation values for the X spin operator given the |0〉 and |1〉 states respectively.

For the Y spin operator, we have:

Which are also zero given the same two states.

Finally, for the Z spin operator, we have:

We can calculate the same six expectation values for the other two axes. Next, we’ll do the other lateral axis, the Y-axis:

Which are the expectation values for the X spin operator given the qubit is in the |+〉 or |-〉 superposition states.

For the Y spin operator and the same states, we have:

The zero value again indicating an average of measurements.

And for the Z spin operator:

Which is similar to the X operator above.

Lastly, the X-axis, which aligns with the particle’s direction of motion. (Photons lack this axis of spin because they move at lightspeed.) We have:

For the X spin operator and the |+i〉 and |-i〉 superposition states. The zero value again signifying a 50/50 result mix.

For the Y spin operator, we have:

Which are the parallel states.

For the Z spin operator, we have:

And so on and so on.